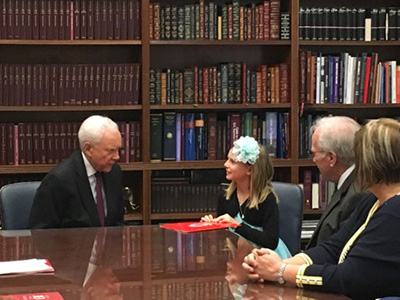 Senator Orrin Hatch listening to fourth grader of Calvin Smith Elementary, Samantha Seaman’s presentation in Chinese and English in his office on April 25, 2018

A local Utah delegation of educators and students, led by the Confucius Institute at the University of Utah, were in Washington D.C. on Apr. 25, 2018 to meet with Utah congressional delegation; they were there to inform Utah’s senators and representatives about the Chinese education in Utah public schools and to share with them their interactions with the Confucius Institute at the University of Utah.  The delegation consisted of a cross section of individuals who have been affected by and involved in the Confucius Institutes’ activities, including students, parents, teachers, a principal, an administrator from school district as well as representatives from the Utah State Board of Education and the University of Utah Confucius Institute. Utah currently boasts over 10,000 students (K-12) enrolled in the Chinese Dual Language Immersion (DLI) program which spans 32 elementary schools and 23 secondary programs. The program is the largest Chinese Dual Language Immersion program in the United States.

The delegation met with Representative Rob Bishop, Senators Mike Lee, Orrin Hatch, and staffers and directors from each of Utah’s six congressional representatives. All six congressional offices expressed strong support for the Chinese education in Utah public schools and the Confucius Institutes’ programs and endeavors in the state of Utah. Senator Orrin G. Hatch (R-UT) praised the Confucius Institutes’ efforts after hearing presentations in Mandarin Chinese from students Samantha, Maryn, and Tate Seamen, all are currently in the Chinese DLI program, as well as Tyler Kohring, a graduate of the University of Utah. Senator Hatch called the Confucius Institutes’ programming “really critical and crucial”, commenting that “China is now considered one of the two greatest countries in the world, and will become greater in the future, so our country [The United States] needs to have a lot of interchange with them.”